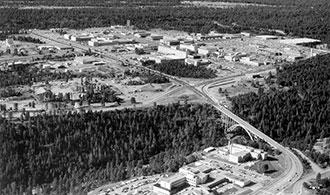 The Los Alamos National Laboratory (LANL) is located 35 miles northwest of Santa Fe, New Mexico in the rural community of Los Alamos. The remote location was perfect for what would become in many ways the birth place of the nuclear era. It also happens, scientific director and one of the “fathers of the atomic bomb,” Robert J. Oppenheimer, had spent his summers as a child in the Los Alamos area and believed it to be an excellent setting for the highly demanding and urgent task of developing the first nuclear bomb.

In the push to develop a bomb Universities across the country were researching and testing diligently, but progress was slow. By 1942, it became clear efforts needed to be more coordinated and streamlined. The Los Alamos Scientific Laboratory was built with the primary purpose of bringing all the personnel and resources necessary under one roof. By 1945, the site employed over 5,000 physicists, chemists, engineers, and others. In the end LANL was a success, developing several functional atomic bombs including the two dropped on Japan. The site continued its research and today serves as a national research facility with an over 2 billion dollar budget. Research has expanded beyond nuclear weapons and into areas such as medicine, alternative energy, supercomputing and a variety of other areas.

The work at Los Alamos was and continues to be dangerous. Safety standards have a come along way since the 1940s, but throughout the history of LANL many workers have been exposed to unsafe levels of radiation and toxic chemicals. The Energy Employees Occupational Illness Compensation ACT (EEOICPA) grants sick nuclear weapons workers up to $400,000 in compensation and medical benefits for their sacrifices. However, the claims process has proven difficult for LANL workers.

In 2012, Los Alamos workers were made eligible to file EEOICPA claims as part of the Special Exposure Cohort (SEC). SEC is a designation given to specific work sites or groups of workers that allow them to be compensated without having to prove a link between their exposure and illness. Those who qualify for SEC have a much better chance of a fast and successful EEOICPA claim. Workers can still apply for compensation under the dose reconstruction if they do not meet the SEC criteria.